Click to learn about our measures in response to COVID-19

Description of the Institution’s Structure

Interpretation of the Statistical Report

Overview of New or Revised Institutional Policies and Procedures

Key Issues Related to Access to Information Complaints and/or Investigations

The ATIA provides government institutions with 30 days to respond to access requests. Additional time may be granted if there are many records to examine, other government agencies to be consulted, or third parties to be notified. Access rights are subject to specific and limited exemptions.

The Office of the Public Sector Integrity Commissioner is mandated to establish a safe, independent, and confidential process for public servants and members of the public to disclose potential wrongdoing in the federal public sector. The Office also helps to protect from reprisal public servants who have filed disclosures or participated in related investigations.

The Public Sector Integrity Commissioner is an independent agent, reporting directly to Parliament.

Description of the Institution’s Structure

The Commissioner, as the head of the government institution, has designated, pursuant to section 73 of the ATIA, the persons holding the positions set out in the delegation order, or the persons occupying on an acting basis those positions, to exercise the powers, duties or functions of the Public Sector Integrity Commissioner as specified therein. A copy of the delegation order is included in Appendix A.

Interpretation of the Statistical Report

Appendix B provides a statistical report on the ATIA applications processed by the Office between April 1, 2017, and March 31, 2018.

Seven consultations were received from other government institutions and processed within the 30-day timeframe. Four were recommended for full release and the three others were partially released. Portions of the documents of one consultation were exempted under the following sections of the ATIA: 16.4(1)(a), 19(1) and 21(1)(a). The two others were partially exempted under section 16.4(1)(a). No extension was applied.

No translations were required to respond to the requests. The Office collected $10 in application fees and spent $37,100 in resources administering the ATIA. 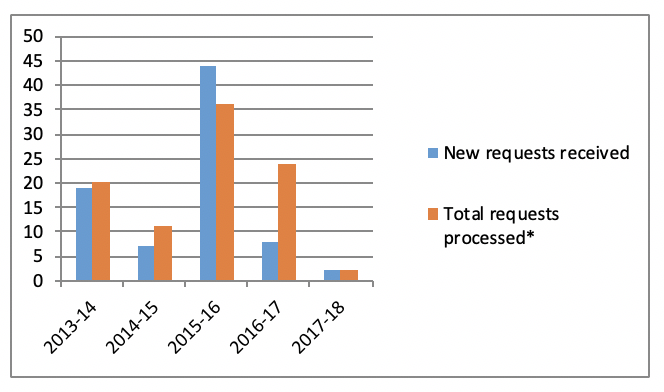 Considering the low volume and nature of the requests received during this reporting period, no training on access to information was provided to PSIC employees. However, a refresher on one’s ATIP responsibilities will be delivered to all personnel in the next reporting period.

Overview of New or Revised Institutional Policies and Procedures

There were no new or revised institutional policies or procedures implemented in the reporting period that had an impact on access to information.

Key Issues Related to Access to Information Complaints and/or Investigations

Though no formal time monitoring was conducted during the reporting period, the Office uses a case management system to track processing times regarding access to information requests. This tool assists the Access to Information and Privacy Coordinator and the contractor dedicated to this function in monitoring timelines to ensure compliancy with legislated deadlines.

The Public Sector Integrity Commissioner of Canada, as the head of the government institution, hereby designates pursuant to section 73 of the Access to Information Act, the person holding the position set out below, or the persons occupying on an acting basis those positions, to exercise the powers, duties or functions of the Public Sector Integrity Commissioner as specified below.

Name of institution: Office of the Public Sector Integrity Commissioner of Canada

2.5.2 Relevant pages processed and disclosed by size of request

2.6.1 Reasons for not meeting statutory deadline

2.6.2 Number of days past deadline

3.1 Reasons for extensions and disposition of requests

Part 5 – Consultations Received From Other Institutions and Organizations

5.1 Consultations received from other Government of Canada institutions and organizations

5.2 Recommendations and completion time for consultations received from other Government of Canada institutions

5.3 Recommendations and completion time for consultations received from other organizations

Part 9 – Resources Related to the Access to Information Act