This page has been archived on the Web

Information identified as archived is provided for reference, research or recordkeeping purposes. It is not subject to the Government of Canada Web Standards and has not been altered or updated since it was archived. Please contact us to request a format other than those available.

This page has been archived on the Web.

Office of the Public Sector Integrity Commissioner of Canada

Office of the Public Sector Integrity Commissioner of Canada

2013-14 will mark the seventh year of the Public Servants Disclosure Protection Act (the Act).  I am pleased to report that the Office is making progress on its mandate and is moving forward with its plans and priorities.

The central role of the Office is to assess the merits of reported disclosures of wrongdoing and complaints of reprisal. It is therefore incumbent on us to analyze each case, to determine if an investigation should be initiated, and where the conclusion of the investigation warrants, bring to the attention of Parliament the finding of wrongdoing or the Tribunal the facts of the complaint of reprisal. We are now equipped to do so more efficiently.First of all, the Act is becoming more well-known. For example, the number of disclosures of wrongful acts has steadily increased each year since the Office was established. In fact, the annual number of disclosures has doubled over the last two years. Our efforts to support employees in the federal public sector and to inspire their confidence in our Office appear to be bearing fruit.

Our objective is to handle all files in a timely and rigorous manner that are entrusted to us, respecting the rules of natural justice. We do not hesitate to launch an investigation when the circumstances warrant. We have in progress, at any time, approximately forty investigations underway as compared to five or six investigations two years ago. More than two thirds of the active investigations were initiated over the last twelve months.

So it is with optimism that we are preparing to participate in the five-year review of the Act and its implementation, which we expect the President of the Treasury Board to initiate shortly. We have concrete suggestions to strengthen the means at our disposal to enable public servants and members of the public to report wrongdoing they witness and to ensure that when they do, public servants are adequately protected.

The Office of the Public Sector Integrity Commissioner of Canada (the Office or PSIC) was set up to administer the Public Servants Disclosure Protection Act (PSDPA or the Act), which came into force in April 2007. The Office is mandated to establish a safe, independent, and confidential process for public servants and members of the public to disclose potential wrongdoing in the federal public sector. The Office also helps to protect public servants who have filed disclosures or participated in related investigations from reprisal.

The disclosure regime is an element of the control framework which strengthens accountability and management oversight in government operations.

The Office has jurisdiction over the entire public sector, including separate agencies and parent Crown corporations, which represents approximately 375,000 public servants. Under the PSDPA, members of the general public can also come to the Office with information about a possible wrongdoing in the federal public sector. However, the Office does not have jurisdiction over the Canadian Forces, the Canadian Security Intelligence Service, and the Communications Security Establishment, each of which is required under the PSDPA to establish internal procedures for disclosure of wrongdoing and protection against reprisal similar to those set out in the Act.

The Office conducts independent reviews and investigations of disclosures of wrongdoing and complaints of reprisal in a fair and timely manner. In cases of founded wrongdoing, the Commissioner issues findings, through the tabling of a case report to Parliament, and makes recommendations to chief executives for corrective action. The Commissioner exercises exclusive jurisdiction over the review, investigation and conciliation of reprisal complaints. This includes making applications to the Public Servants Disclosure Protection Tribunal, which has the power to determine if reprisals have taken place and to order appropriate remedial and disciplinary action.

The Office is guided at all times by the public interest and the principles of natural justice and procedural fairness. The Commissioner submits an annual report to Parliament and special reports may also be submitted to Parliament at any time.

More information about the Office’s mandate, roles, responsibilities, activities, statutory reports and the PSDPA can be found on the Office’s website.

The Office has one strategic outcome that guides the pursuit of its mandate and reflects the long-term benefits sought for Canadians as demonstrated in the following chart:

External risks arise from events that PSIC cannot influence, but must be able to monitor and respond to in order to mitigate the impact. The internal risk category consists of risks that can broadly be categorized as people, processes, systems, and culture.

The intake of new cases and the number of investigations has continued to increase. The complexity of each case can vary significantly, as such the number of cases may not necessarily reflect a pressure on resources required to monitor and address cases in a timely manner.  However the trends indicate that case volumes will continue to increase. Under these circumstances there is a risk that PSIC’s ability to address a significant rise in case volumes in a timely manner may be impacted.  As outlined in the plans, the Office is completing a review of its operational processes with the view to streamline and optimize the use of available resources while ensuring the disclosure and reprisal management function is timely, rigorous, independent and accessible.

Information security is critical in the context of disclosures, investigations and the need for preserving confidentiality and trust in the Office. Sensitive or private information must be protected from potential loss or inappropriate access in order to avoid potential litigation, damaged reputation and further reluctance in coming forward. The Office has implemented many practices aimed at ensuring the security of information, which include briefing and confidentiality agreements, random information security checks within premises, controlled access for the storage of sensitive information, and a "threat risk assessment" of information management and information technology security was conducted.  In addition, there is a plan to review, develop and implement an updated security plan.

This table presents a summary of the total planned human resources for the Office for the next three fiscal years. 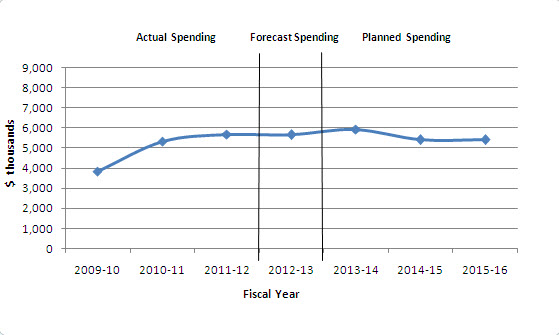 The Office’s yearly actual spending has stabilized over the past three fiscal years, as positions were staffed and infrastructure was put in place. The planned spending in 2013-14 reflects a continuation of this trend with incremental spending of $263,000, or 5%, largely for professional services to supplement internal resources in processing case files and to support the implementation of the government-wide case management system. In 2014-15 and 2015-16 the reduction in planned spending of $532,000, or 9%, reflects the impact of implementing cost containment measures which include a reduction outsourcing requirements resulting from the completion of onetime projects to enhance systems and the realization of operational efficiencies from process improvements and consolidating resources.

This program addresses the need to take action in bringing resolution to disclosures of wrongdoing and complaints of reprisal and contributes to increasing confidence in federal public institutions. It aims to provide advice to federal public sector employees and members of the public who are considering making a disclosure and to accept, investigate and report on disclosures of information concerning possible wrongdoing. Based on this activity, the Public Sector Integrity Commissioner will exercise exclusive jurisdiction over the review, conciliation and settlement of complaints of reprisal, including making applications to the Public Servants Disclosure Protection Tribunal to determine if reprisals have taken place and to order appropriate remedial and disciplinary action.

In order to achieve the expected results, PSIC plans to undertake, in addition to ongoing activities, the following initiatives:

Efforts under this program activity will support improvements in the efficiency and effectiveness of PSIC's internal operations. Specific initiatives in this area include:

The future-oriented financial highlights are prepared on an accrual basis to strengthen accountability, and improve transparency and financial management. The variance between the figures that follow and the planned spending amounts provided in other sections of the RPP relate to such items as services without charge received from other government departments, amortization, and severance and vacation pay liability adjustments.

The increase in expenses of $279,000, or 4%, is largely a result of incremental costs for professional services to supplement internal resources in processing case files and to support the implementation of the government-wide case management system.

The complete set of future-oriented financial statements can be found on PSIC’s website.

All electronic supplementary information tables listed in the 2013-14 Reports on Plans and Priorities can be found on PSIC’s website.

The tax system can be used to achieve public policy objectives through the application of special measures such as low tax rates, exemptions, deductions, deferrals and credits. The Department of Finance publishes cost estimates and projections for these measures annually in the Tax Expenditures and Evaluations publication. The tax measures presented in the Tax Expenditures and Evaluations publication are the sole responsibility of the Minister of Finance.

Section IV — Other Items of Interest

If you have a comment or a question for PSIC, you can contact us by telephone or mail.

Disclosures of Wrongdoing or Complaints of Reprisal

If you are thinking about disclosing wrongdoing or making a complaint of reprisal, we can provide you with more information about the process in complete confidentiality.

Please note: The Office does not accept formal disclosures of wrongdoing or complaints of reprisal via e-mail or this website because they cannot provide secure electronic transmission of personal or confidential information.

To submit a disclosure of wrongdoing or complaint of reprisal, fill out the appropriate form and mail, fax (secure transmission) or bring it to the Office in person.